Use of Static Analysis Tools

Critical embedded software should use static checking tools with a defined and appropriate set of rules, and should have zero warnings from those tools.

Consequences:
While rigorous peer reviews can catch many defects, some misuses of language are easy for humans to miss but straightforward for a static checking tool to find. Failing to use a static checking tool exposes software to a needless risk of defects. Ignoring or accepting the presence of large numbers of warnings similarly exposes software to needless risk of defects.

Accepted Practices:
Discussion:
Static checking tools look for suspicious coding structures and data use within a piece of software. Traditionally, they look for things that are “warnings” instead of errors. The distinction is that an error prevents the compiler from being able to generate code that will run. In contrast, a warning is an instance in which code can be compiled, but in which there is a substantial likelihood that the code the compiler generates will not actually do what the designer wants it to do. Reasons for a warning might include ambiguities in the language standard (the code does something, but it’s unclear whether what it does is what the language standard meant), gaps in the language standard (the code does something arbitrary because the language standard does not standardize behavior for this case), and dangerous coding practices (the code does something that is probably a bad idea to attempt). In other words, warnings point out potential code defects. Static analysis capabilities vary depending upon the tool, but in general are all designed to help find instances of poor use of a programming language and violations of coding rules.

An analogous example to a static checking tool is the Microsoft Word grammar assistant. It tells you when it thinks a phrase is incorrect or awkward, even if all the words are spelled correctly. This is a loose analogy because creativity in expression is important for some writing. But safety critical computer code (and English-language writing describing the details of how such systems work) is better off being methodical, regular, and precise, rather than creatively expressed but ambiguous.

Static checking tools are an important way of checking for coding style violations. They are particularly effective at finding language use that is ambiguous or dangerous. While not every instance of a static checking tool warning means that there is an actual software defect, each warning given means that there is the potential for a defect. Accepted practice for high quality software (especially safety critical software) is to eliminate all warnings so that the code checks “clean.” The reasons for this include the following. A warning may seem to be OK when examined, but might become a bug in the context of other changes made to the code later. A multitude of warnings that have been investigated and deemed acceptable may obscure the appearance of a new warning that indicates an actual bug. The reviewer may not understand some subtle language-dependent aspect of a warning, and thus think things are OK when they are actually not.

Selected Sources:
MISRA Guidelines require the use of “automatic static analysis” for SIL 3 automotive systems and above, which tend to be systems that can kill or severely injure at least one person if they fail (MISRA Guidelines, pg. 29). The guidelines also give this guidance: “3.5.2.6 Static analysis is effective in demonstrating that a program is well structured with respect to its control, data, and information flow. It can also assist in assessing its functional consistency with its specification.”

McConnell says: “Heed your compiler's warnings. Many modern compilers tell you when you have different numeric types in the same expression. Pay attention! Every programmer has been asked at one time or another to help someone track down a pesky error, only to find that the compiler had warned about the error all along. Top programmers fix their code to eliminate all compiler warnings. It's easier to let the compiler do the work than to do it yourself.” (McConnell, pg. 237, emphasis added).

Critical embedded software should follow a well-defined set of coding guidelines, enforced with comprehensive static checking tools, with essentially no deviations. MISRA C is an example of an accepted set of such coding guidelines.

Consequences:
Coding style guidelines exist to make it more difficult to make mistakes, and also to make it easier to detect when mistakes have been made. Failing to establish or follow formal, written coding guidelines makes it more difficult to understand code, leading to less effective code reviews and a reasonable expectation of increased levels of software defects. Failing to follow the language usage rules defined by a coding style guideline leads to using the language in a way that can normally be expected to result in poorly defined or incorrect software behaviors, increases the risk of software defects.

A classic example of a subtle defect in the C programming language is:
“if (x = y) { …}”   The programmer almost always means to compare “x” and “y” for equality, but the C programming language is defined such that this code instead copies the value of “y” into “x” and then tests to see if the result of that copy operation was non-zero. The correct code would be “if (x == y) { … }” which adds a second “=” to make the operation a comparison instead of an assignment operation. Using “=” instead of “==” in conditionals is a common mistake when creating C programs, easy to confuse visually, and is therefore prohibited by typical style guidelines even though the single “=” version of the code is a valid language construct. A loose analogy might be a prohibition against using multiple negatives in an English language sentence because it is too difficult to not not not not not not (sic) make a mistake with such a sentence even though the meaning is unambiguous if the sentence is carefully (and correctly) analyzed.

It is accepted practice to have a defined set of coding guidelines that cover all relevant aspects of programming language use. Such guidelines are typically tailored for each project, but once defined should be followed rigorously. Guidelines typically cover code formatting, commenting, use of names, language use conventions, and other relevant aspects. While guidelines can be tailored per project, there are nonetheless a number of generally accepted practices for reducing the chance of software defects (such as forbidding a single “=” in a conditional evaluation as just discussed).

Of particular concern in safety critical software are language use rules to avoid ambiguity and hazardous language constructs. It is a generally accepted practice to outright ban hazardous and error-prone language structures to avoid the chance of defects, even if doing so makes software a bit less convenient to write and those structures would otherwise be a legal use of the language. In other words, an essential aspect of coding style for safety critical systems is outlawing code structures that are technically valid but are too dangerous or error-prone to use. The result is a written document that defines coding style in general, and language usage rules in particular. These rules must be applied rigorously and with essentially no exceptions. (The “no exceptions” part is feasible because it is acceptable to tailor the rules to the particular project. So it is not a matter of applying arbitrary rules and making exceptions, but rather picking rules that make sense for the situation and then rigorously sticking to them.) In short, every safety critical software project must have a coding style guide and must follow it rigorously to achieve acceptable levels of safety.

It is often the case that it makes sense to adopt an existing set of language use rules rather than make up your own. The MISRA C set of coding rules was specifically created for safety critical automotive software, and is the most well known C programming language subset for safety critical software. A typical practice when writing safety critical C code is to start with MISRA C, create a defined set of which rules will be followed (usually this is almost all of them), and then follow those rules rigorously. Exceptions to adopted rules should be very few, granted only after a formal written review process, and documented in the code as to the type of exception and reason for granting it. Preferably, automated tools (widely available for MISRA C as discussed in Jones 2002, pg. 56) are used to enforce the rules in addition to a required peer review of code.

Selected Sources:
The MISRA C guidelines (MISRA C 1998) are specifically designed for safety critical systems at SIL 2 and above. (MISRA Report 2 p. ix) They consist of a list of rules about coding practices to use and practices to avoid. They concentrate primarily on language use rather than code formatting. While MISRA C was originally developed for automotive applications, it was being set forth as a more general standard for adoption in other domains by 2002 (e.g., Jones 2002).  Over time, MISRA C has transition beyond just automotive applications to mainstream use for high integrity software in other areas. A predecessor of MISRA C is the list of rules in the book Safer C (Hatton, 1995).

NASA says that it is important that all levels of the project agree to the coding standards, and that they are enforced.   (NASA 2004 pg. 146)

McConnell says: “Heed your compiler's warnings. Many modern compilers tell you when you have different numeric types in the same expression. Pay attention! Every programmer has been asked at one time or another to help someone track down a pesky error, only to find that the compiler had warned about the error all along. Top programmers fix their code to eliminate all compiler warnings. It's easier to let the compiler do the work than to do it yourself.” (McConnell 1993, pg. 237).

MISRA Software Guidelines require the use of “automatic static analysis” for SIL 3 automotive systems and above, which tend to be systems that can kill or severely injure at least one person if they fail (MISRA Guidelines 1994, pg. 29). The guidelines also give this guidance: “3.5.2.6 Static analysis is effective in demonstrating that a program is well structured with respect to its control, data, and information flow. It can also assist in assessing its functional consistency with its specification.” IEC 61508 highly recommends (which more or less means “requires” as an accepted practice) static analysis at SIL 2 and above (IEC 61508-3 pg. 83).

Finally, an automotive manufacturer has published data showing that they expect one “major bug” for every 30 coding rule violations (Kawana 2004): 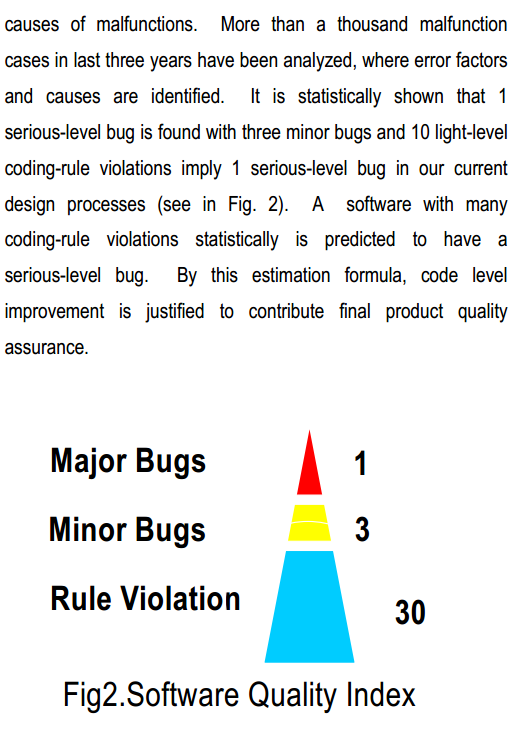 Note: As with my other posts in the last few months this was written regarding practices about a decade ago. There are newer sources for coding style information available now such as an updated version of MISRA C. There is also the the ISO-26262 standard, which is intended to replace the MISRA software guidelines..  But we'll save discussing those for another time.