Perhaps the single most difficult thing to get right in a bug report is assigning a priority. It is tempting to assign a priority based on how spectacular the result is. But you also need to take into account how likely the bug is to manifest in a deployed system. For example, a bug that causes a system to crash and automatically reboot may be a lot more dramatic than a confusing screen message, but if that confusing screen message results in thousands of tech support calls, it could be a disaster for your company.  The best approach is one that combines severity and probability.

It is tempting to try to use fancy math to combine severity and probability. Usually that doesn't work out so well in practice. Instead, I recommend borrowing a technique from the safety critical system community. They use a Risk Table to assign a "criticality" to a particular adverse event as part of their Preliminary Hazard Analysis (PHA). You can use the same table in a different way and just say you are assigning bug "priority" instead of "risk."  Below is an example Risk Table: 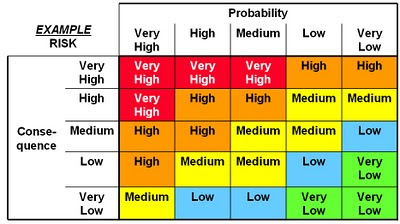 Probability is your best estimate as to how often the bug will be seen in use. Consequence is how big a problem it will cause. The Risk (indicated by each box in the grid) is how big the risk is to product reputation -- which ought to be the same as the bug priority.  It helps to have clearly defined statements to guide assigning any particular bug to a row and to a column. Once you assign probability and consequence, the table tells you the priority of that particular bug.


You can modify this table to have 3 to 6 rows and 3 to 6 columns depending upon your needs (the table can be a rectangle rather than a square).  You can also modify the asymmetry of assigning risks as has been done in this example (consequence is weighted a bit higher than probability for this table by putting extra "Very High" boxes on the top row and so on). The point is not the table itself, but rather that binning things in this way makes assigning bug priority a lot easier for people to do in practice.
at March 24, 2011